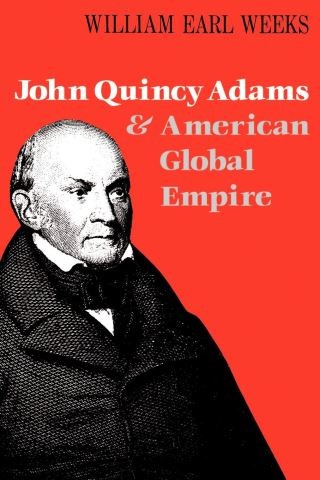 This is the story of a man, a treaty, and a nation. The man was John Quincy Adams, regarded by most historians as America's greatest secretary of state. The treaty was the Transcontinental Treaty of 1819, of which Adams was the architect. It acquired Florida for the young United States, secured a western boundary extending to the Pacific, and bolstered the nation's position internationally. As William Weeks persuasively argues, the document also represented the first determined step in the creation of an American global empire.

Weeks follows the course of the often labyrinthine negotiations by which Adams wrested the treaty from a recalcitrant Spain. The task required all of Adams's skill in diplomacy, for he faced a tangled skein of domestic and international controversies when he became secretary of state in 1817. The final document provided the United States commercial access to the Orient—a major objective of the Monroe administration that paved the way for the Monroe Doctrine of 1823.

Adams, the son of a president and later himself president, saw himself as destined to play a crucial role in the growth and development of the United States. In this he succeeded. Yet his legendary statecraft proved bittersweet. Adams came to repudiate the slave society whose interests he had served by acquiring Florida, he was disgusted by the rapacity of the Jacksonians, and he experienced profound guilt over his own moral transgressions while secretary of state. In the end, Adams understood that great virtue cannot coexist with great power.

Weeks's book, drawn in part from articles that won the Stuart Bernath Prize, makes a lasting contribution to our understanding of American foreign policy and adds significantly to our picture of one of the nation's most important statesmen.

William Earl Weeks: William Earl Weeks is professor of history at San Diego State University. He is the author of Building the Continental Empire: American Expansion from the Revolution to the Civil War.